Document your Ford truck project here and inspire others!

Register Log in
You are using an out of date browser. It may not display this or other websites correctly.
You should upgrade or use an alternative browser.

The Case of the 12 Year Fuel Filter

I'm trying to tackle a problem that has persisted against my best efforts as I've gained experience AND against multiple mechanics. Short of tin-snipping the thing off, we're not sure what to do regarding getting a stuck fuel filter off my 1992 F-150 Custom.

I went in with fuel filter removal tools again from Harbor Freight. There's no way to get them on. I now see what every other mechanic has continued to tell me.

Basically, the front hose has maybe 1/4" gap or less between the fuel filter and the line's start. There's not enough room to shove anything in there. I could modify a pen cap per Chris Fix's secondary option or grind down a 3/8" tool so I could get it in there and HOPE it has enough reach to push up and disengage the line. That'd be pretty simple.

However, the REAR line is something else. It has about 2-4 mm of space if that. It's like spark plug gap size between the aft fuel filter and the line's beginning.

As far as I can see there are no plastic retaining clips. I'm not sure if this is the OEM hose, but it has those nice ford blue sleeves with ford writing on them, so I'm guessing this is an OEM line and no one made it a bigger problem than the original engineers did off the assembly line. I have the front tank selected on my fuel switch and it's empty to the point the engine cannot start anymore on that fuel line when selected (to minimize pressure and mess).

I'm uploading a few pictures. Please take a look and let me know. I have paid 2 mechanics to replace this and no one succeeded -- thinking the first one just told me it was done as it's just a fuel filter and charged for it, second one at least was honest that he thought we might have to cut it out as he'd tried every trick he knew (I don't think he shaved a tool down or tried the pen cap trick yet).

Here's Chris Fix's pen trick for reference in the second half of the video.
Chris Fix on Fuel Filter Removal and Installation 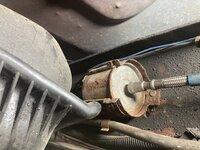 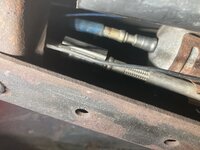 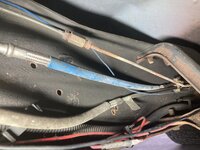 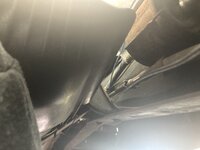 I'm looking at the fittings in the pictures (easier than laying on my back oogling at this thing) and it looks like IF the front can come off, the back might release some pressure and create more space between the fuel filter housing and the fuel line and enable another gap-insert similar to the front.

Should I go for shaving down my 3/8" Pittsburgh Fuel Line Tool so it can go in, or just try the pen cap trick and shove it in there? Not a lot of space, but anything that'll get this swapped out after 12 years of wanting it replaced would be super (fist paid a guy to do it December 2009 and he said he did, but it was the same fuel filter when I got around to looking again). Meh... I get it. It's a tough fuel filter to remove Easier to just say you did it and assume minimal performance issues will follow for awhile. The bill was incredibly cheap for that and a sticky caliper (my first set I ever installed, kept pulling to the right). He did fix the pull on the caliper a bit. I went back at it a year later and got it perfect (and had to replace the rotors anyway). Would have been nice to get my fuel filter back though vs him keeping it to make it look like the job was done. Oh Cheboygan, how I miss you. They now have one less Taco Bell but 3 Pot Shops, so it's got that going for them.
1997 F-350 XLT "Trusty Rusty" (tbc Red VII)
1992 F-150 Custom "Red IX"
1991 F-250 302 5.0 Plowtruck Project
1983 F-700 10K Dump Truck, no CLD Req'd

First, the lines are pushed too close. Twist and pull, should get some gap. Then you have torelease teh retainer spring inside.
My trucks:
The workhorse, 86 F250 4x4 6.9 nat aspirated, 3.25 exhaust, custom intake, electric fuel pump, otherwise well used stock... not real pretty but just loves to work!

ASE certified parts specialist
I do most all of my own work so I know who to complain to..Roger That's the video I found too.
He didn't say pull the lines apart and get more gap (if that's possible, why oh why has no one else figured that out either when attempting on my truck?!)

I'll give it a shot and see if I can't make some space to get a tool in. I have a low profile one coming too on Amazon so if I can make some space, THAT one may go in easier than the HF Pittsburgh set.

On one of the other forums a guy was talking about his problem, but didn't realize he had the little plastic release mechanism not requiring a fuel filter release tool. However, another guy said basically what you said and it took him months to get the gap in the fuel filter. He basically went under and sprayed PB BLaster or WD40 every few days and wrestled with it for an hour before giving up. Eventually one day the gap was big enough and it came apart.

So, I guess I'll have an epic tug o war battle to write ye old poem and ode to sooner or later.

I really have a love hate relationship with those connectors. If the tool you have is the silver reversable set like he showed in the video go to the autopart store and get the smaller plastic spring lock tools and use them. The retainers inside the fitting sometimes rust if the services havent been done in awhile. So could be the case. May need to put a screw driver or small pry bar between the filter and fitting to get it to back out a little to get the tool in between them. The smaller ones seem to work better for the fuel lines over the metal reversible ones.
Shawn
2004 F350 Crew Cab Super Duty Dually 6.0 v8 Power Stroke.
2004 3.9L V6 Mustang

"I don't think the intelligence reports are all that hot. Some days I get more out of the New York Times. "
-John F. Kennedy

"I never FAIL... I succeed at finding what doesn't work."
-Christopher Titus
[SIGPIC][/SIGPIC]

Like I had said, you will have to twist the line or spin the filter while pulling the line. Whoever put that filter on shoved them way on to the point you will not get any tool in there. You also can not pull them straight due tothe nature of teh springs that hold it on. They will just dig in deeper. That is why you must spin and pull.
My trucks:
The workhorse, 86 F250 4x4 6.9 nat aspirated, 3.25 exhaust, custom intake, electric fuel pump, otherwise well used stock... not real pretty but just loves to work!

ASE certified parts specialist
I do most all of my own work so I know who to complain to..Roger